Would You Like To Trade Your Shoulders For A Set Of Lats? 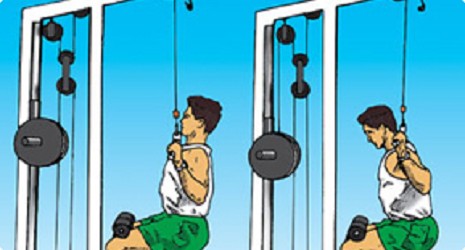 Today, the lat pull down exercise is performed in almost every gym in the world. Lat development is sought after for its contribution to ones physique; helping women to look "toned" and helping men to obtain the ‘V’ shape that contributes to their masculine appeal.

Although most people are driven to the lat pull down machine for the aesthetic benefits, the latissimus dorsi muscles serve several critical functions with regard to maintaining a healthy musculoskeletal system. For example, the lats are the only muscle that bridges the spine to the shoulder. This link is important during all lifts because acting as the most powerful extensor of the arm, the lats are used to pull a load closer to the body. This reduces the load against the spine and thereby improves one’s ability to lift a load.

The lat muscles also communicate with the opposite gluteus maximus (butt) muscle through the connective tissues of the back (thoracolumbar fascia). This important lat-gluteal relationship serves to integrate the shoulder and opposite hip, which is essential for efficient movements during walking, running and pulling objects at work or in sport. Additionally, the lat-gluteal relationship serves as an important mechanism for stabilizing the spine. 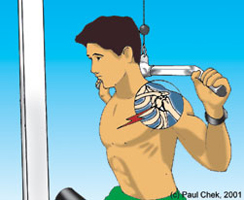 Since the advent of the lat pull-down machine, many people have performed the "behind-the-head lat pull-down". Although the exercise is popular among exercise enthusiasts and athletes alike, the exercise puts the shoulder joint at risk of injury.

Unfortunately, most exercise machines are developed by metal workers who are mildly interested in resistance training or they are designed by mechanical engineers, neither of which are biomechanical engineers! The result is that most lat pull down machines do not allow optimal positioning to protect the anterior capsule of the shoulder joint from potentially damaging stress.

The anterior capsule of the shoulder joint is made of ligaments and connective tissue, which are designed to restrict external rotation and abduction (movement away from the midline of the body). When performing the behind-the-head lat pull-down, if the machine does not allow you to position your body such that the cable hangs directly above the base of the neck behind your head (about where a necklace would run behind your neck), when you attempt to pull the bar down behind your head it is inevitable that you will not only take your shoulder beyond it’s optimal range of motion for safe function, you will be doing this repetitively under significant load (Figure 1)!

When you position yourself so that the cable and bar hang down directly in front of your nose when sitting with good upright posture, you are far less likely to force the shoulder joint into a potentially damaging position (Figure 2). 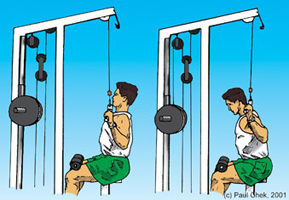 Another common cause of shoulder damage during the behind the head lat pull down is poor form. When performing the lat pull-down exercise, it is important to NOT bend forward at the trunk or protrude your head forward. Both of these faulty maneuvers contribute to excessive strain on the shoulder. Another important tip when performing the lat pull down exercise is to always keep your forearms as vertical as possible while pulling the bar down. If you allow your forearms to move out of the vertical plane (usually as you bend forward and protrude your head!), you will put excessive strain the subscapularis muscle in your rotator cuff. This could lead to rotator cuff strain.

While pulling the bar down, you need only pull the bar to the point that it goes below your chin. Pulling the bar down as far as the nipple line will result in the forearms approaching horizontal, the trunk being flexed forward and the head coming forward, which places tremendous stress on the neck, shoulder, and elbow, precipitating injury!

It is also important to realize that there are almost no known sports or work activities where you must pull a loaded or weighted object behind your head from above. With this in mind, we must carefully consider the validity of the exercise, particularly when one considers that any benefit of pulling the bar behind the head can be obtained from performing the exercise in front of the head with good technique!

If your shoulders hurt during lat pull-downs, it is important to remember that there are many other ways to strengthen and develop your lats. For example, you can do chin-ups, low rows, high cable rows, dumbbell rows, bent over rows and even deadlifts; try a heavy deadlift and you will be amazed how much it works your lats!

In light of the facts, I close by asking you, "are you willing to trade the possibility of injuring your precious shoulders for a dogmatic attraction to the behind the head lat pull down exercise?" I hope not!